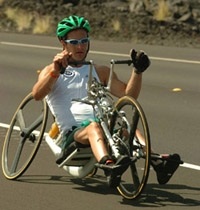 Growing up in Kingston, Massachusetts, Jason Fowler spent most of his childhood on motorcycles and was a nationally ranked amateur racer by age 10. A natural competitor with self-discipline, he achieved recognition as a remarkable championship athlete. Jason's life was forever changed, however, on March 13, 1991. While riding his motorcycle he collided with an obscured rock. He hit the ground head first, severing his spinal cord at the T5/T6 level. His injury left him paralyzed from the chest down.

He was only seventeen years old. 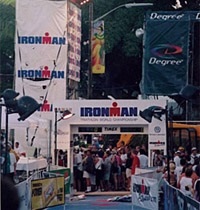 During the weeks that followed the accident, Jason looked toward the future. He insisted that he would be as active as possible, as soon as possible. Competitive racing had been his passion. His drive, determination, and strong will propelled him into racing again - only this time in a wheelchair and only four months after his accident and spinal fusion surgery.

Despite some medical and physical setbacks, Jason continued to look ahead. He never accepted that his life would be anything other than extraordinary. Like most world class athletes, Jason maintains a rigorous training schedule and continues to tirelessly pursue success. To date, he has completed over 140 road races, 28 marathons, and 18 triathlons. In June 2008, after a grueling qualifying race in Lubbock, Texas, Jason earned a race slot in the October 11, 2008 Ironman Triathlon World Championship in Kona, Hawaii. 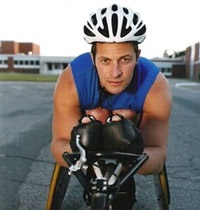 In addition to racing, Jason has also excelled academically and professionally. He attended the University of Illinois where he was a member of the wheelchair racing team and then returned to Massachusetts to attend Northeastern University in Boston, where he earned a bachelor's degree in Finance. In May 2004, he earned an MBA with a concentration in health care management from Boston University and most recently is working as a financial manager at Medtronic, Inc. in Atlanta, Georgia.

Jason continues to push through barriers, ignore limitations, and set new expectations. When asked why he does what he does, he replies simply that:

“It is because people think I can’t.”